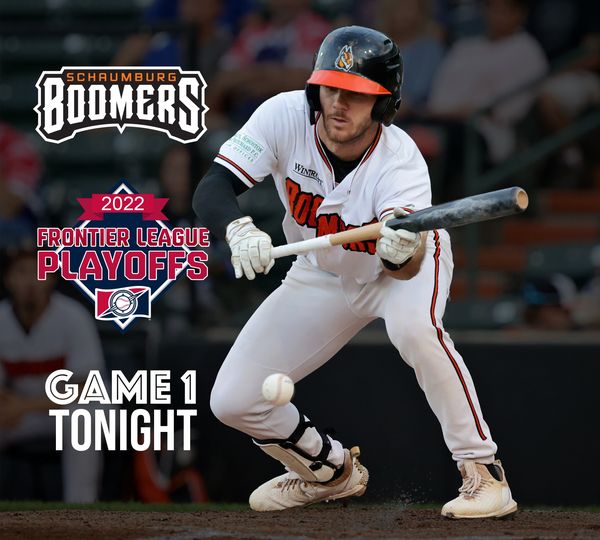 The Schaumburg Boomers welcome the Washington Wild Things on Friday night for Game 1 of the best-of-three Frontier League Divisional Series at Wintrust Field.

The two teams are no strangers to each other after going the distance in a five-game series last year to determine the Frontier League Championship, won by the Boomers after capturing games four and five on the road in Pennsylvania. The Boomers have won four championships and have never lost a playoff series. Schaumburg reached the divisional round after winning the wild card game over the Evansville Otters by a 5-1 final, the second wild card win in team history. The Boomers built a 5-0 lead early in the game, scoring three in the first and two in the second. Braxton Davidson connected on a two-run homer in the second. The pitching staff for the Boomers did not allow a hit and just one Evansville batter reached base until the eighth inning when the Otters scored their lone run. Six pitchers combined on the victory, striking out nine.

Schaumburg set a Frontier League record for strikeouts this season with 921, becoming the first team in league history to record 900 or more strikeouts. Shumpei Yoshikawa set the team’s single season record for strikeouts with 117. Aaron Glickstein struck out 99. All-Star closer Darrell Thompson saved 17 games while punching out 92 in 50.1 innings for an average of over 16 per nine innings. Thompson matched the team record for appearances by pitching in 45 contests. Jake Joyce, the first player in team history to play for the club in six seasons, moved into third all-time in league history in appearances.

The team also set franchise records for triples, walks and homers while equaling the stolen base mark set last year. Alec Craig led the league in walks with a team record 92 while Davidson was second in the league with 79 free passes. The tandem have been hitting first and second in the order. Craig finished with 30 steals and is the team’s all-time leader in stolen bases and led the league in walks for a second straight year. Davidson homered 18 times and owns 28 in his two seasons with the team. All-Star Chase Dawson set the league record for triples with 24 this season. Dawson also doubled 22 times and set the team’s single season record for extra-base hits with 51 while leading the team with 64 RBIs. Mike Hart joined the team on the 4th of July and belted a career high 19 homers while driving home 48 in 51 games with the team. Clint Hardy drove home 55 runs and set the career record for RBIs while Nick Oddo surpassed the team’s career mark for games played. Local product Brett Milazzo stole 19 bases, one of five on the team to reach double digits and finished the year hot, batting .462 over the final 10 games of the year. Washington won the West Division with a 62-34 record, matching the best mark in the league.

The Wild Things led the division virtually the entire season and won five of the nine meetings this season though five of the games were decided by just a single run.Washington posted the fourth best ERA in the league at 4.08 while the Boomers were sixth. The primary starting rotation for the Wild Things combined to finish 40-16. Washington’s offense finished fourth in the league in average and fifth in runs scored led by postseason All-Star Nick Ward, who hit .349 with 19 homers and 61 RBIs. Ward ranked among the league leaders in average, homers and stolen bases all season. Four players that appeared in at least 82 games hit over .300 for the Wild Things during the 96-game stretch.